Your Startup's Vision and the Legend of the Fury Road 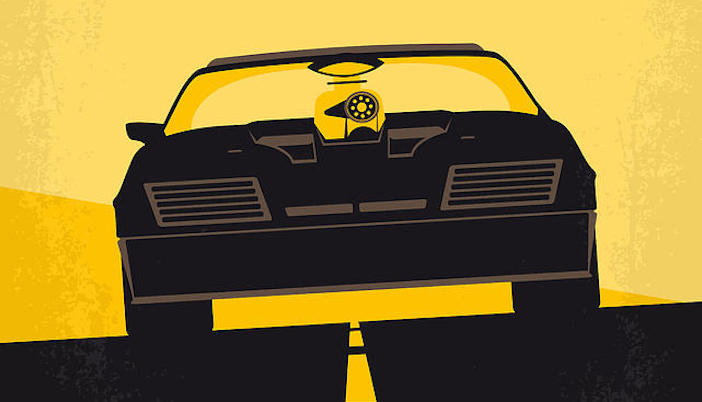 A film legend is a pre-production write up, the equivalent to Silicon Valley's "business plan on the back of a napkin," that lists the main points of a story.  Clarity of thought, focus, and precise execution are the main qualities that a start up (or a film maker) must have to create an outstanding product.  It all starts with a clear idea, a piece of paper, and the willingness to do the work to see it realized -- and to tweak or discard the things that aren't working as early as possible.  The legend for Mad Max: Fury Road is a great example that shows how George Miller, its producer/director/writer, transformed the back-of-a-napkin story points into one of the best films of 2015.  What can startups and ventures learn from this?  Movie spoilers ahead!

The Legend of the FURY ROAD 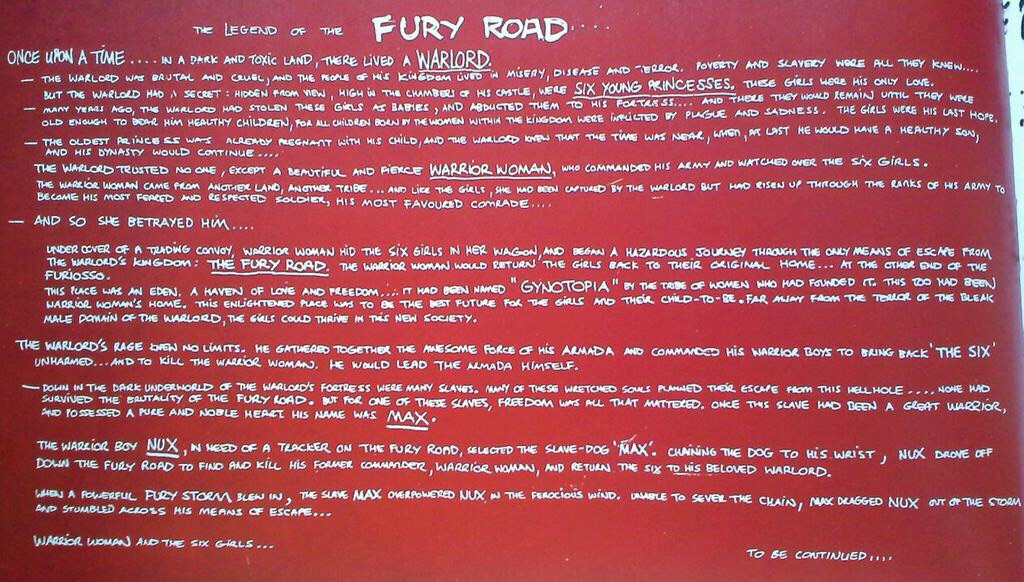 This was written in 1997, when Mr. Miller was on a flight between Australia and the US.  It took 16 years for this to get to production!  It's amazing how much of the original story the film retained.  The fact that it took so long to produce also shows that Miller wasn't willing to compromise the clarity of purpose.  Confident execution allowed the production team to keep most of these ideas intact.

One of the film's best characteristics is how it doesn't beat the audience with unnecessary exposition and backstory.  The film is just a slice of life.  It could've happened before or after the events depicted in other Mad Max stories; it doesn't matter.  The film jumps right into the story and trusts the audience to come along for the ride.  It's a great product that stands on its own.

The film shows things, it doesn't just tell you about them.  Or bore you with exposure.

Although the story is unchanged, there are details here and there that had to be modified.  Tweaking the design in response to user response, advise, etc. can be a good thing.  The entrepreneur must keep her eyes, ears, and mind open to suggestions and potential changes.  Throw away the bits that don't work, implement any and all advise that will make a better product.  The final film changed a few things around, added some details, removed some dumb ideas, but the main story remained the same.

The film works because the characters and situations, as over the top as they seem from the outside, are real to the actors and settings.  That in turn helps convey the story in a way because there are no winks to the audience, no justifications on why something was or wasn't done.  Things are just the way they are, and each player contributes to the story just by applying their skills and motivations to the situation.

This can be said both about the characters and the production team.  There's humor and fun in the story, but everyone involved was serious about telling a story without winking at the audience.  Just get it done, and do a great job at it.

The best example in the film itself is when Max tries to shoot their pursuers; the rifle is too heavy and he misses.  They're almost out of bullets.  Furiosa can't aim the rifle at all because of its weight.  One bullet left.  The solution?  Here:

Fury Road was planned for release in the early 2000s.  The terrorist attacks of Sep. 11, 2001 put the production in Limbo until 2013.  The extra time helped technology catch up to other factors, and the producers were able to leverage advances in special effects that made for seamless integration with practical stunts.  The end result?  A more immersive experience for viewers, who didn't get bombarded by old-style CGI or limited by sub-par special effects.  And yes...  more teamwork. 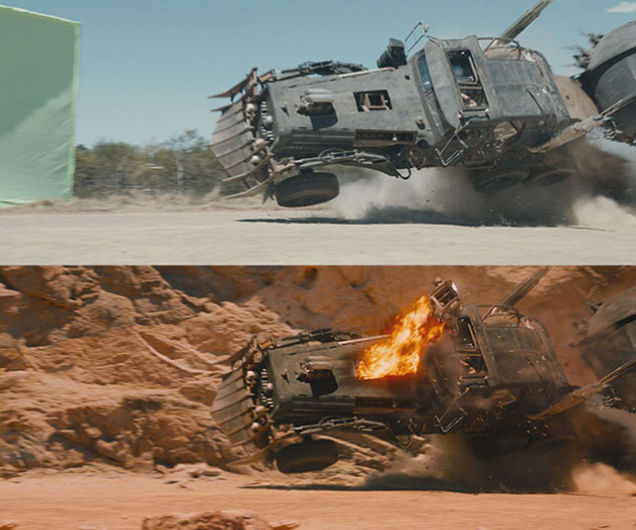 The story behind almost any film production can be narrated as a start up success or failure.  Fury Road is the rare production that's a crowd pleaser and a critics' favorite (there are even serious features about it as an Oscar™ contender for this year).  It's important to remember that, like many other ventures, the enjoyment it offers and its success had a humble beginning in a half-page outline scribbled on the bottom part of an in-flight magazine.

Fair Use Notice:  these images are used for identification in the context of critical commentary of the work, Mad Max: Fury Road.  They make a significant contribution to the user's understanding of the article, which could not practically be conveyed by words alone. These image are included in the body of the article discussing the work, to show the primary visual image associated with the work, and to help the user quickly identify the work.  Use for this purpose does not compete with the purposes of the original artwork.  All images © Copyright 2015, and elements are trademarked by, the creators, producers, and distributors of the motion picture Mad Max: Fury Road.